So what does it take to plan a trip to the roof of Africa?  Several things. What route? When to go? What outfitter/tour company? What are the weather considerations? What are the altitude considerations? Buy or rent gear? What time of year to go? How much will it cost?
When we decided Africa was definitely on the destination list for our Round-The-World trip, an attempt at climbing Mt Kilimanjaro almost instantly became a must.  Looking back at old emails it appears as though I started writing outfitters as far back as July asking questions about the climb.  The email to multiple outfitters went something like this: “ A friend and I are planning a trip to Tanzania in the spring and we are hoping to trek Mt. Kilimanjaro.  We have been looking at different tour options and researching success rates.  I see on your website you offer several options for trekking (and summiting!) Kilimanjaro. What would you recommend for for two enthusiastic, healthy and fit women, 28 and 30years old? Though we reside at about 200M, we have successfully hiked and camped in Peru above 4000M for several days after appropriately acclimating to the altitude.  We would truly like to climb Mt Kilimanjaro but want to be sure to do so in  safe and most enjoyable fashion!  Any information, suggestions or recommendations you have to offer would be greatly appreciated.”
After several backs and forths with two or three different companies, the one I got the best vibe from was Ultimate Kilimanjaro.  Upon choosing Ultimate Kilimanjaro, we had to pick a route and settle on a departure date.  One of the nice things about this company is the fact that they offered daily departures on any route at any time of the year.  We knew we would be there in early May, right smack in the middle of the low tourist season, so as much as joining a few others on the trek would have been nice, the flexibility of the being able to leave on the exact day that best fit our schedule was very nice as well.
So what route do we take?  There are six routes to Uhuru peak, the very top of Mt. Kilimanjaro.  How do you pick one? Well, Ultimate Kilimanjaro also happened to have a “What Route is Best For Me?” link on their web page.  I had to read the descriptions only once before knowing Rongai Route would be best for Michelle and me.  Rongai is considered “the road less traveled” when it comes to Killimanjao, only 15% of climbers choose this route. It’s difficulty rating is moderate among the other routes.  There’s a good chance of spotting wildlife.  The climb takes you up one side of the mountain and down the other -- double the scenery. And if those reasons weren’t plenty to have my heart set on the Rongai Route, we would also be less likely to see loads of rain (possibly 24 hours per day) as compared to other routes.

Posted by CaptainHappy at 8:41 AM 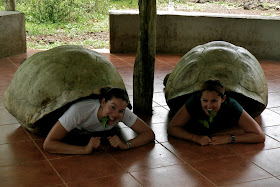